April 28, 2010
Ok, so I've noted that I don't want players to treat magical items as fungible bonuses. I'd like each item to be treated as a unique, individual item with a story. After all, it takes a spell caster of significant power an equally significant amount of resources to create permanent magic. Such items shouldn't be treated like something from the dollar store.

To help with this, I did make some tables to assist in brain-storming the story of the item. However, that's just fluff and isn't immediately useful to the players. Fine for me as the DM, but the game isn't about me and my little stories, it is about the player's actions and the story they make. My role is to give them something to work with. So I've tried to add small but interesting powers that fit with the item's context.

This post is also in response to Bat's request that I post some items with history as we discussed in his post of the spell "Decipher History."

One nice thing for me as a DM: if I'm using less permanent magic, I'll be able to spend more time and imagination on the few that are found.

Here are some items already in the campaign:

This +1 dagger was found in the Inn of the Little Bear (from the Dragonsfoot e-zine Footprints #15, modified to be the Inn of the Blue Lantern along the Yggsburgh-Greyhawk road.) A +1 dagger is about as throw-away an object as a permanent magic item can be.

The dagger belonged to the hunted agent, Oswald, whose ghost haunts the Inn. The object should reflect its owner and his mission, so I decided (with some glances at my tables) that the dagger was bequeathed to Oswald by the Lord Mayor himself, a druid. Two interesting aspects of the campaign are the ongoing tension between the Old Faith and the religion of St. Cuthbert and the near forgotten conflict between the Suel migrations (in this area, the Maure) and an alliance of local Flan people, their druids, and the demihuman/fey. Being a druid of the Old Faith, the Lord Mayor had in his possessions an object from that ancient conflict: a dagger that the druids of the time created for that war. To emphasize that the dagger is ancient, I made the dagger bronze with a bone hilt. Inscribed upon the hilt were the runes “ManSkinner” in Ancient Flan. For this name to be remembered, it has to have a use: If the dagger is held and the wielder says the words, “Man Skinner” in Flan, the dagger will glow or cease glowing as a candle.
The lawful good follower of St. Cuthbert that claimed the dagger did investigate the dagger's history and discovered some of this with mixed feelings - making the dagger memorable. He still calls it 'manskinner.'

+2 Spiked Club.
This +2 spiked club was found in the module Dark Chateau. What to do with a spiked club?

Rolling on those random tables, this item was created by a deity. Ok – this was a gift from the god of Ogres and Fury, Grolantor, to an ogre chief. Said ogre eventually found his way to the Dark Chateau where he either fell prey to Zagyg's magic or subsequent adventurers.
To make the item unique and not just “a +2 weapon”, the weapon sizes itself to whoever defeated the most recent wielder. Grolantor rewards fury.

The tables say this was created by an orc cleric. So, this was made by an orcish shaman of Grumish in the Pomarj as part of an arsenal for raids northward into the Wild Coast and beyond. Its description is “Crude but efficient scimitar. Hilt is made of long flange (hand) bones wrapped around the tang of the blade and tied with leather. Two runes decorate the blade. A single Eye is carved into the cross of the hilt.”
When the scimitar draws blood, the two runes (orcish for Blood Letter) glow red as a candle. If brandished when lit it can be a negative to enemy's morale.

Wizard's Mate:
+1 Shield.
This item was found in the module “Idol of the Orcs.” I had placed the module within the western Menhir Hills. In the onion layer of background for my version of Greyhawk, this is where some of the Suel migrations settled and attempted to conquer the local Flan native folks, because someday I'd love the campaign to get to modules like Rob Kuntz's Maure Castle. Leaving clues to such things doesn't violate my understanding of a sandbox, because I'm not obligating the players to follow up on these hooks.

Created by a Suel wizard, an apprentice of the Maure, the shield was intended for the wizard's body guard. The shield is nominally a +1 shield. However, any non-magic missile weapon that passes within 5' of the bearer (in any direction!) is targeted at the wielder. To assist the bearer in surviving, the shield is +3 vs. non-magical missiles.

The large steel kite shield is painted white and emblazoned with a stylized sunburst with eight points. Runes are inscribed near the grip. Read magic indicates a charm against missiles. 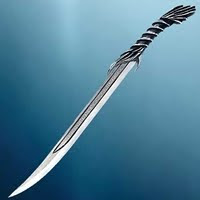 +1 long sword.
This item was found in the module Pod Caverns of the Sinister Shroom” and was used by the Shroom itself. The rear of the Pod Caverns is connected to an underground river that itself is part of a network linking many caverns of the Underdark. I wanted to leave a hook for that, and describe some of the Shroom's own history. The Sinister Shroom is from one of the many fungal caverns in the Underdark, and set out for his own purposes of spreading his fertile fungalness to upper caverns and beyond. To arm himself, the Shroom traded with drow – at an Underdark trading post – for a weapon to use against surface dwellers. This was in line with the drow's purposes.

This +1 long sword is an elegant weapon, with a slightly curved, thrusting and edged blade. Onyx decorates the pommel, matching the black leather of the hilt. Runes of black are etched upon the blade.
The runes are drow, recognizable but unintelligible to other elves and name the sword “Light Quencher.” Once per day, wielder of the sword may say its name and extinguish one non-magical light source (up to a lantern or a small camp fire) within 30'. If the fire is held, its owner is entitled to a saving throw versus magic against the level of the sword's wielder.

Popular posts from this blog

Thinking out loud:  suppose you’ve got an episodic megadungeon campaign.     Each session, the group picks a location in the megadungeon to explore.   Sometimes these locations are already deep within the dungeon.   Now, a well-designed megadungeon has multiple entrances, some of which provide ready access to deeper parts.   But what if those entrances haven’t been found yet?   Reality impedes our gaming quite enough – how much time do we spend just “getting to the good parts”?    I'm pondering a game mechanic - whether a random roll, skill check or something more or less involved that can shorten that process.  I haven't made one yet, but I'm putting this out here for feedback. Some groups may spend precious game time working through the map (newly restocked as a megadungeon should) attempting to avoid encounters.   Other games or groups may just hand wave away this difficulty and start play deep within the dungeon.   I’d consider that, but it seems to remove
Read more

February 23, 2013
The sandbox co-DMed Castles and Crusades game continues.  With school I'm not there every week, but the game goes on.  I'm also playing in a bi-weekly Hackmaster game, thankfully not DMing on that one. But a buddy bugged me about running a Traveller game.  What the hell?  Why would he do that to me?  Not that I've never done that to him (twice, for the record).  But then I couldn't get it out of my head until I'd written 3 pages on it. Here's the first, the overall setting "What has the Galaxy gone up to now?"  If I get around to it, I've got campaign assumptions, and a page on initial location and characters and a bit on some initial hooks. The big question: does this make you want to get out 2d6 and a sheet of paper and roll for survival?  Or yawn at all the tropes? * The Directorate is over.   It’s done.   Its fuel tanks are empty and its lost and adrift.   Ain’t no refueling this sucker. It wasn’t the Free Federation of Plane
Read more

May 03, 2010
The bogus boo is a creature who comes out at night, and why? He likes the air, he likes to scare the nervous passer-by! He has two wings - pathetic things - with which he cannot fly. His tusks are fierce, yet could not pierce the softest butterfly. He has two ears , but what he hears is very faint and small. And with his claws on his four paws he cannot scratch at all. He looks too wise with his owl eyes, his aspects grim and ghoulish. But truth to tell, he sees not well and is distinctly foolish. The bogus boo - what can he do, but huffle in the dark? So don't take fright: he has no bite, and very little bark! by James Reeves Frequency: Rare No. Appearing: 1, possibly 2 (mated pair) Armor Class: 8 (1E) 12 (C&C) Move: 20" Hit Dice: 2 % in Lair: 50 % Treasure Type: See below No. of Attacks: 2 Damage/Attack: 1-2 Special Attacks: Surprise, Fright, Mistaken Identity Special Defenses: Dark Vision Magic Resistance: Standard Intelligence: Low Saves: P (C&C) Align
Read more